Laguna to Quezon 50K Ultramarathon (L2Q) in 2013. Photo taken by professional photographer Tong Pascua of Photo-Ops. I love the timing on this one.

When you fall in love with running (even with someone), you may lose a lot of things…including your friends. But in the process, you also gain and win worthy people who will always remind you that you made the right choice.

In this fifth edition of RunnersPH Interview, a Bataan Death March ultramarathoner shares his motivation behind running and how it enormously impacted his life when he decided to give his first 3K a nice try.

Bien Soberano, welcome to The Finish Line! Tell us something about yourself that the world doesn’t know.

I get a thrill from making up pretend conversations with myself or someone else in my head when I’m out running. This may explain why I prefer to run solo.

When did you start to run and what motivated you?

I started running in April 2010 after months of prodding by my friend Ryan Jubelag. It was the cool thing to do at that time so we tried it. I caught the running bug after finishing my first 3K.

Ryan didn’t last the year, while I have been running for six years now. There’s something about hitting pavement on your own that works out the body, pumps the heart, and clears the mind.

Since then, endorphins have become my drug of choice.

At first, what problems did you encounter or what physical complaints did you experience? How did you take care of those?

Body pain was a natural consequence of working out, especially if you’re coming from a sedentary lifestyle. Side-stitches and ankle pain were not uncommon. My knees took most of the pain initially to the point that I injured myself and had runner’s knee less than a year after I started.

Initial diagnoses suggested surgery. I visited premier Sports Doctor Raul Canlas and he recommended therapy sessions at Sprains and Strains Alabang. I was back running in only three months.

Do you run individually or in groups? Tell us something about your running community if you have joined one.

I used to run with a group called Team Kamote Runners (TKR). We’re not as active as we used to be, but the core members of the team have remained friends and sometimes still run together. TKR was born out of members of Volunteer Team 6 at the Takbo.ph Runfest in 2010. These days, I run solo both during workouts and races.

Team Kamote Runner’s first anniversary as a team. We ran the 16K distance at the Takbo.Ph Runfest 2011 together wearing headwares and fascinators.

Please describe your typical training ground. Where do you usually run?

My favorite stomping ground is Nuvali. It is about 10 kilometers away from my house and I run up to Nuvali and down for a 22 kms run once or twice a week. For shorter runs, I run in and around the Enchanted Kingdom (EK) parking lot. The area along San Lorenzo road is flat, concrete, and is good for a 10-16 kms workout.

Nuvali Park in Sta Rosa, Laguna at 2:00 in the morning.

Which running shoes are you using? Please share some personal tips on how to choose the right shoes for optimum performance.

My favorite is the Saucony Kinvara series. Ever since I discovered the Kinvara 3 in 2012, I have always bought this pair. They are the perfect road racing shoes for me. For trail, I wear a pair of Salomon Speedcross trail shoes.

I’m an underpronator which means I push off from my small toes when I run. I’m also a forefoot/midfoot striker which means either the front of my foot or my whole flat foot lands first.

Knowing how you push off and how you land can determine the type of shoes you need for best running performance. There are running stores that have a footprint gait analysis machine (like RUNNR) that can help narrow down the type of shoes that work best for you.

What other running-must-haves do you wear or carry with you and which you cannot run without?

Aside from the usual shirt, shorts, and shoes, I wear a Flipbelt where I store my cellphone; a ziplock bag with money and keys; and a pair of shades. I carry a bar or two of Snickers chocolate too if it’s a very long run.

I cannot run without my Ultimate Direction Handheld Bottle.

How do you prepare for a major running event? Tell us about the details of your training plan.

My main form of preparation is mileage.  Depending on the distance I’m running, I do long runs that approximate the distance, the time, and the pace of the race I am attempting to finish.

I cross train through cycling and I do a specific set of exercises that improve my core and upper body strength.

How often do you participate in organized fun runs?

Back in 2010 when my addiction to running coincided with the running boom in the country, I was joining events every weekend. Sometimes even twice in one weekend if there’s a race on a Saturday and a Sunday.

I’ve lied low from that addiction over the years although this year I’m back again running almost every weekend.

During the race, how do you keep yourself motivated and strong to reach the finish line? 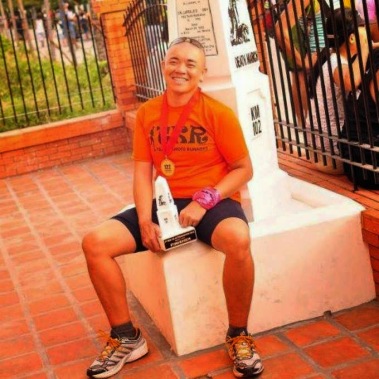 Bien at the Km 102 Marker at old train station in San Fernando, Pampanga – the finish line of Bataan Death March 102.

A good song with a beat that matches my pace is a great motivator. My current favorite is Indian Summer by Jai Wolf.

Also, I set a target time based on how fast I finished my last run and my average finish time, then I set a pace based on those. I then track my performance by checking my GPS watch every kilometer or so.

Aside from my GPS watch, I use my wireless Sony Smart B-Trainer/Music player to remind me how far I’ve run, what my pace and heart rate are, and how much calories I’ve burned.

Can you think of an embarrassing moment you had while running? Do you mind sharing it with us?

Once during a 50K trail run, I took a wrong turn and ended up at the aid station that I just left an hour ago. It didn’t dawn on me that it was the same aid station until I looked up and saw the surprised faces of the marshals trying to contain their laughter. Only then did I realize they were the same ones from the last aid station. I got lost and ended up right back where I started.

What is the first thing that you do after finishing a race? Give us also some methods that you found effective for your post-race recovery.

The first thing I do is finish off the cocktail of energy drinks that I carry with me. It’s nothing special, just a mixture of three different kinds of sports and energy drinks. For me, hydrating is key to fast recovery.

One of the best ways to recover fast is to do lots of post-race stretching. Recovery drinks like Enervon HP help too. Although it is not a post-race supplement, I always take Enervon Activ. I never have had to worry about fatigue since I started taking it.

Share with us the benefits you have gained from running ever since you started.

I have always been relatively sedentary. I never thought I would be this active especially at my age. This relatively healthy lifestyle I’m living now is one of the best things I have ever done for myself. I also gained lifelong friends through my running team apart from the connections with organizers and sponsors through my running blog. (See also: Running Benefits That Changed My Life)

Inspire us with the greatest accomplishments you had so far achieved in running.

I’m particularly proud of having finished Bataan Death March 102K Ultramarathon (BDM102 ) twice. I barely finished it the first time. I vowed to come back the following year and finish better. I trained, not only to run faster and stronger, but to run on self-support. All my training paid off when I finished with a time good enough for a silver medal (gold, silver and bronze medals are given to runners who finish based on a specific cut-off time). 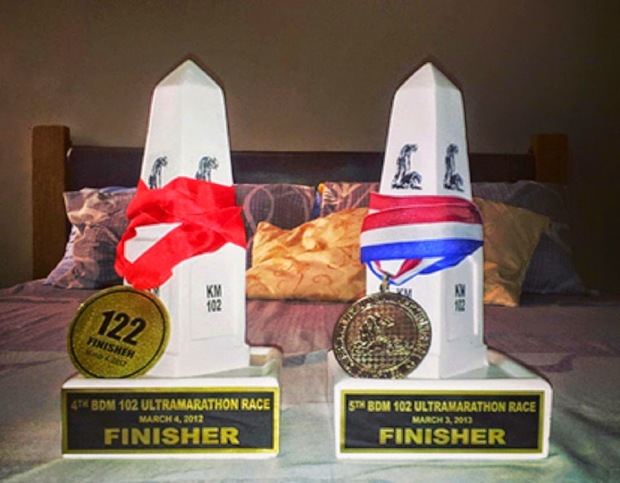 Back to back Bataan Death March 102K finisher’s trophies

Looking back, how has running changed or impacted your life as a whole.

I used to be a Saturday night party-goer. Smoking was a daily thing and drinking with friends was a weekend staple. I gave up both vices as soon as I started getting serious with my running. While I eventually lost touch with my party-going friends, I gained a lot of runner friends in the process.

Team Kamote Runner in 2015. We’ve lost some and gained some, but we’re still together.

We’re interested to know your future goals as far as running is concerned. It can be something else that you want to do more.

My immediate goal is to finish the Bataan Death March 160K (100-Mile) Ultramarathon (BDM160) in 2017. I also hope to finish a triathlon either in 2017 or 2018 as soon as I get enough training in competitive open water swimming.

What is your success mantra or running philosophy?

Nelson Mandela once said, “It only seems impossible until it is done.” [Tweet This] When I started running 3Ks and 5Ks, I could not even imagine running a marathon. Now I’m running distances twice more than that.

Finally, please give a personal message or advice to inspire and encourage those people who are about to start running.

Buddha has a saying: “He is able who thinks he is able.” [Tweet This] Plant that seed in your mind what you wish to accomplish, feed it with practice and perseverance, and watch yourself do the things you thought you never could. You will surprise yourself, I promise you.

RunnersPH Interview features inspiring stories of Filipino runners. It is a series of conversations where they share proven tips, personal advice, lessons learned, and gainful experiences that show the delightful ways that running can intersect with life.

3 Comments on The Drug That Keeps Me Running